The integrated Modular Unmanned Ground System (iMUGS) project Consortium showcased the usage of autonomous unmanned ground systems for various defence missions, including intelligence gathering, casualty evacuation and last mile re-supply at the project’s penultimate demonstration in Versailles, France. The event was led by Safran and Nexter and supported by other consortium members.

All the partners met on the premises of Nexter Robotics, made available during the weeks of integration and validation preceding the demonstration.

During the demonstration, three Milrem Robotics’ THeMIS UGVs equipped with payloads from the consortium members and cooperation partners fulfilled several autonomous missions to demonstrate the ability of the complete iMUGS system. These included autonomous mission planning from the operator’s point of view, ISR (Intelligence, Surveillance & Reconnaissance) with object detection and recognition, autonomous re-supply and casualty evacuation and cyber threat response.

The missions, performed by the French armed forces, presented how manned units can utilize unmanned systems to conduct missions more safely and effectively. “Unmanned systems increase stand-off distance from the enemy and, thanks to various sensors and effectors, provide soldiers the means to gather a higher quantity and much more precise information about their operation area than humans are capable of,” said Kuldar Väärsi, CEO of Milrem Robotics, the iMUGS Consortium lead.

“Autonomous unmanned assets are a game changer for armed forces as they allow the allocation of soldiers to more important tasks,” Väärsi added.

The command and control (C2) and tactical C2ISR by GMV and sol.one were setup in the Krauss-Maffei Wegmann’s Boxer Armoured Personnel Carrier (APC) with a C2 mission module and a static command centre. Cyber threat response was provided by Talgen. dotOcean and Insta showcased, via video, global and local swarming capabilities, respectively, in their in-house simulator.

The demonstration organized in France was the fifth of a total of six demonstrations held during the iMUGS project. The previous demonstrations were held in Estonia, Latvia, Finland, and Belgium. The last will be held in December in Germany. 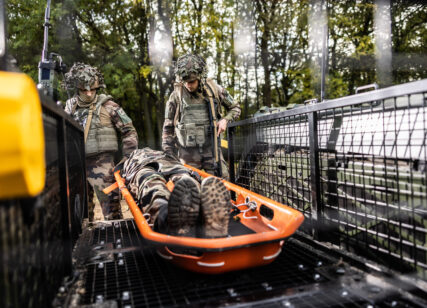 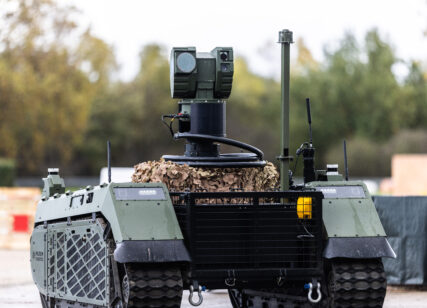 About the iMUGS project

The aim of the project is to standardize a European-wide ecosystem for aerial and ground platforms, command, control, and communication equipment, sensors, payloads, and algorithms. The project addresses challenges such as enhanced interoperability, increased situational awareness, and faster decision-making.