Operationally proven during several exercises, experiments, and the anti-insurgency mission Operation Barkhane in Mali – the THeMIS is a multi-role unmanned ground vehicle (UGV) intended to reduce the number of troops on the battlefield. THeMIS’ open architecture enables it to be rapidly configured from having a transport function to being weaponized, performing ordnance disposal, or supporting intelligence operations according to the nature of the mission. THeMIS UGVs have been acquired by 16 countries, 8 of which are members of NATO, including Estonia, France, Germany, the Netherlands, Norway, Spain, the UK, and the US. 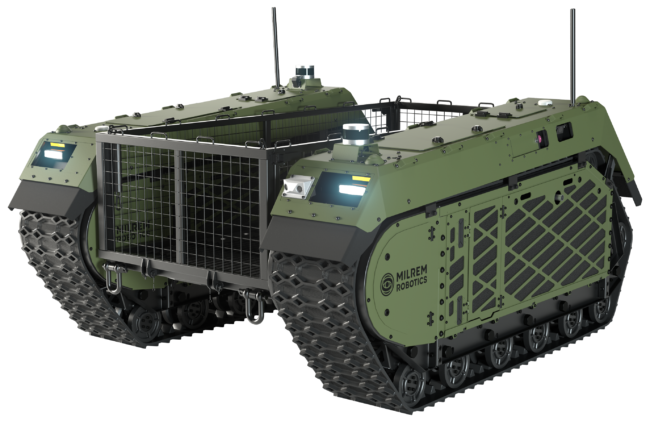 Carrying supplies and equipment in combat is often difficult for dismounted units. Due to the soldier’s physical limitations, the weight of additional equipment and heavy weapons often restrict what the soldier can take into battle. The purpose of the THeMIS Cargo is to reduce the cognitive load of soldiers and provide a means to carry and utilize extra gear and firepower. The THeMIS Cargo increases the mobility of dismounted units and makes them more effective against the adversary. The THeMIS Cargo can also be used to support on-base logistical activities and for last-mile resupply. 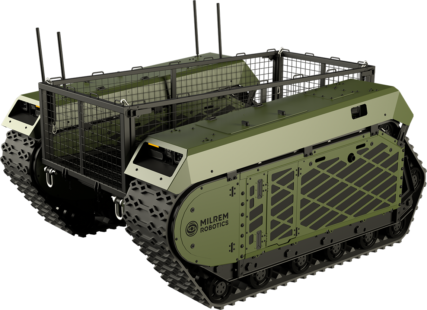 The THeMIS Cargo is intended to support dismounted troops by carrying everything a soldier would normally carry, thus letting the fighter concentrate on the mission at hand. It can be outfitted with various types of tie downs and restraints to prevent load shift. 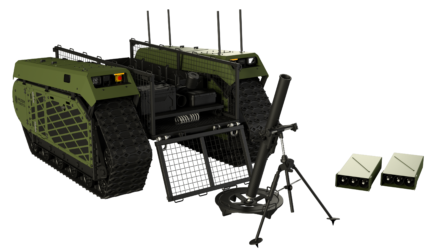 The THeMIS Mortar carrier has been adjusted to accommodate a mortar up to 81 mm. The Cargo platform is equipped with a specially designed suspension system for safe transportation and utilization of the mortar, extra equipment and ammunition, making it rapidly deployable on harsh terrain.The main purpose of this system is to enable logistical supportand indirect fire for manoeuvre forces. 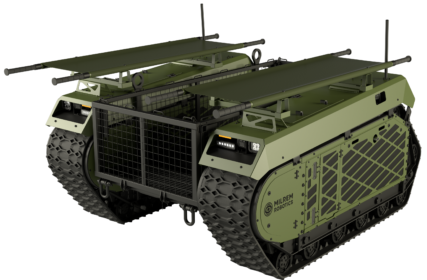 The purpose of the CASEVAC platform is to provide rapid evacuation for urgent casualties from the point of injury to higher-level medical facilities. It reduces the need for manpower usually used for casualty evacuation.The vehicle facilitates most NATO stretchers used in the armed forces. 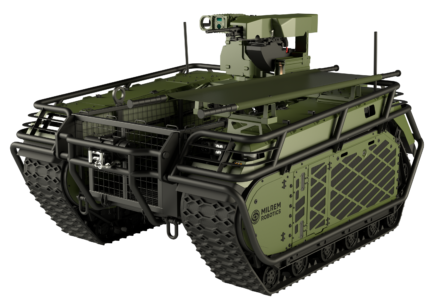 The main purpose of the THeMIS Combat Support is to assist military infantry or special intervention police units in high threat, riot control and counterterrorist (CT) urban environment scenarios. The THeMIS Combat Support includes a stretcher, a bumper kit, equipment storage boxes and attachments for extra equipment on the fenders that can be adjusted according to the nature of the mission. It can also be equipped with light remote weapon systems to increase firepower in addition to easing the work-load of combatants. 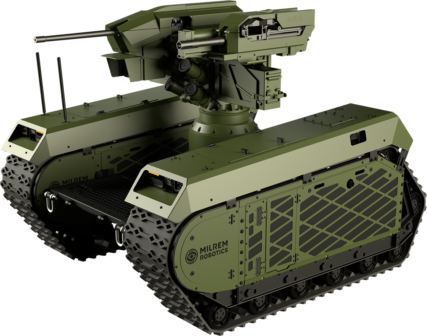 The ADDER was the first remote weapon station integrated into the THeMIS. This system has been tested in the cold Estonian winter in partnership with weapon station developer and manufacturer Singapore Engineering Land Systems under the supervision of the Estonian Defence Forces. 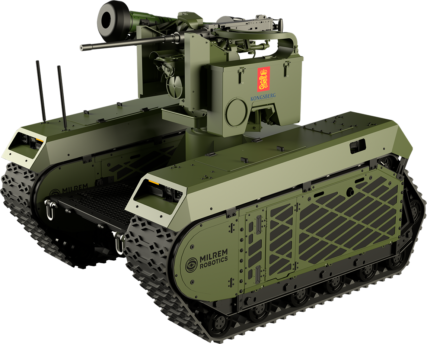 The PROTECTOR remote weapon station from KONGSBERG was integrated in 2017 and is a valuable addition to the THeMIS RWS family. There are several versions of the PROTECTOR RWS available, one of which is equipped with the Javelin missile system. 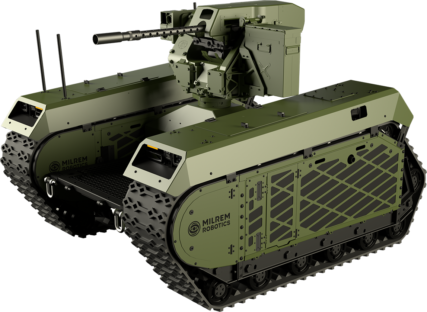 As the name suggests this unit is equipped with the deFNder® Medium remote weapon station developed by FN Herstal. In partnership with FN Herstal and the Estonian Defence Forces this armed UGV has been deployed at the biggest Estonian defence exercise Spring Storm 2017.
In December 2017 live firing tests were conducted in Estonia where the weapon system was tested with a moving UGV as well as a stationary vehicle. 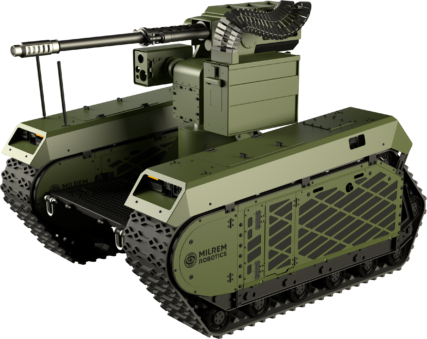 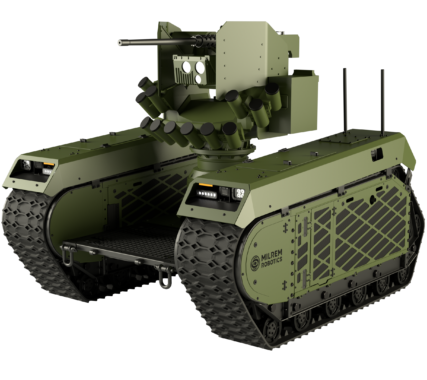 The GUARDIAN 2.0 by Escribano Mechanical & Engineering provides defence capabilities over short and medium ranges with high firing accuracy and it is a cost-effective solution for defence against asymmetric threats. The system is stabilized and can operate by day and by night. Operational functions include surveillance, target identification and tracking. Ballistic calculations for shooting are programmed into the main computer unit, allowing improved shooting accuracy. 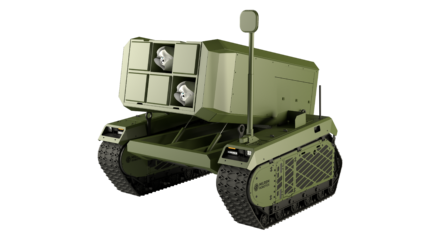 The THeMIS Combat with the Hero-120 by UVision can be equipped with up to six Loitering Munition systems that will provide dismounted infantry and Special Forces units with long-range ISR and firepower combination. Ideal for anti-tank missions or other strategic objectives, the Hero-120 is the largest of UVision’s short-range systems. It carries a 3.5 kg warhead and can endure an extended flight time of 60 minutes. 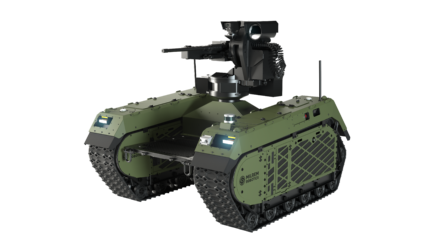 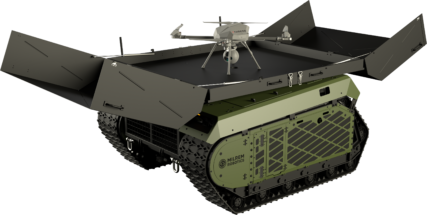 The THeMIS Observe with the KX-4 LE (Long Endurance) Titan UAV by Threod Systems is the perfect tool for surveillance, rescue and law enforcement missions. The system features a heavy-lift multirotor with multiple payload options. 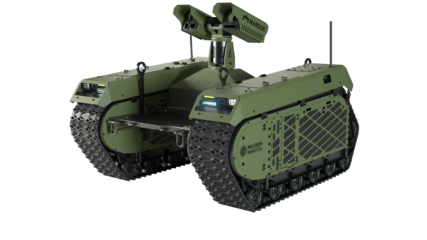 The THeMIS can be outfitted with small- or large-calibre weapon systems, but can also serve as an IED detection and disposal platform. The possible uses for the THeMIS are almost limitless. 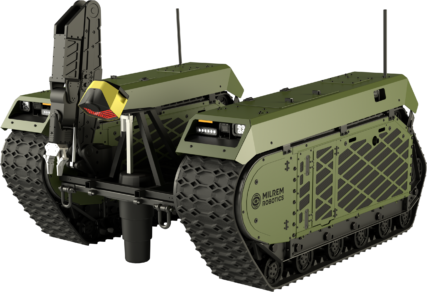 The THeMIS GroundEye system is the first explosive ordinance detection and disposal unit that has been developed in partnership with Raytheon UK. This unit includes all the capabilities of the THeMIS as well as the following GroundEye features:

Watch a demo video of the THeMIS